Before we dive into the next week’s finds, I’ve included a short reminder of my picture rating system. A full explanation was included last week.

Apparently there’s a 2004 remake of this with Rob Lowe, James Cromwell, and Donald Sutherland in it. Honestly, the whole time I was watching this one I was thinking Donald Sutherland should be in it. I think that’s because Donald Sutherland is a Watcher. As with It, the book is better. The movie version removes all scare factor. Because the characters are still King’s, they work, though I liked my imagining of Mark Petrie better.

Substitutes: Misery, The Shining, Carrie, Let the Right One In

I did not expect much from this one, but I loved it. I liked the deranged hitchhiker, Sally’s adventurous spirit, Franklin’s a pre-Belushi Belushi, and even good old Kirk, not to mention the guy who ran the gas station and Leatherface himself. The filming style, and in particular the sound editing, were top-notch. The movie juxtaposes news broadcasts during key moments that show how sick the world really is. I was included, because I was scared basically the whole movie. The only belief I had to suspend was Sally’s struggle to get away from Leatherface. She knows exactly where he is at any moment because of that loud chainsaw, and he can’t hear her. I feel like she could hide or trip him on his own blade. Marilyn Burns commits to the role of Sally, and it is this commitment that in the end makes you wonder how much of Sally’s sanity is left.

Christian Bale is incredible in this film. It’s well made and well written. It’s scary in the sense that there’s a sense of dread, and that it could happen to anyone. It’s scary what he gets away with too. The ending makes sense, but I’ll need to watch this one again to get it. 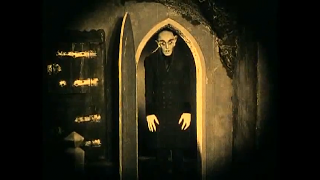 My first silent film was this great adaptation of Dracula, and it requires a shift in cultural expectations. (read: you cannot check Twitter during a silent film and know what’s going on). I loved seeing how they could create scares in the twenties. The music was incredible. The actors had to work so hard to get the audience to invest. I felt included because it was fun to see the classic archetype so close to its origin.

This movie is perfect. You should be watching it right now.

Jimmy Stewart is so much fun in this movie. Edith Head did the costume design, so Grace Kelly looks fantastic. I was completely swept up in peeping on the neighbors. This one is more suspense than scare, but the ending is satisfying.

What have you been watching?